Chaos In Parliament House of Ghana Between The NDC, NPP MPs 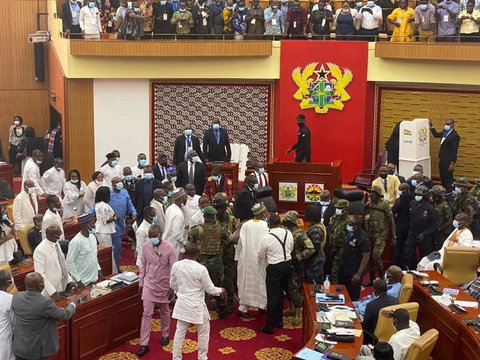 Chaos mars in the Parliament House of Ghana as MPs hurled expletives at each other, punches were thrown, ballot boxes were snatched and voting booths been kicked during the process of electing a Speaker of Parliament for the 8th parliament of Ghana.

The election went into a near-violent hold up after leadership of the NDC in the House accused their colleagues from the NPP of violating the secret ballot rule of the election by showing their ballot to themselves.

Meanwhile, this has been the first time in the history of Ghana fourth Republic that military men have had to storm the house of honourable men to ensure there is peace.

Immediately the soldiers appeared on the scene, there was a fierce resistance put up particularly by the NDC MPs to send the military men out of the house.

For about 10 minutes, the clash between the MPs and the military continued until the armed forces finally budged and left the house for proceedings to continue.