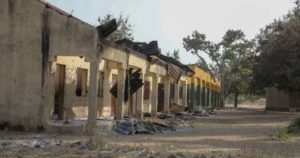 It was reported that the insurgent group, Boko Haram attacked several communities on Saturday 26 December in Borno State. It was stated that the insurgents killed at least three people who were identified as two hunters and one civilian alongside destroying schools, places of worship and shops.

It was also reported that thousands of bags of farm produce were looted by the insurgents alongside raiding and emptying shops and market stalls.

The communities that were attacked are: Tashan Alade, Shaffa, Azare, Sabon-Kasuwa and Debro. Isa Gusau the spokesman for the Borno state governor, Babagana Zulum said the governor was not in the state when the raid happened. However, he has since returned to the state and visited some of the affected communities.

Gusau further stated that Zulum flew from Abuja to Maiduguri on Sunday 27 December and took a military chopper to visit the communities raided on Saturday night.

Burnaboy and Davido Clash At A Club ...