What Is NDLEA SWAT And Why Are They On Our Roads?

The photo was shared on Twitter by popular Nigerian rapper and social activist, Ruggedman which depicts two different scenes where operatives of the NDLEA SWAT were interrogating vehicle occupants and searching their phones.

The rapper in the post questioned who the operatives were, and why they were searching phones.

Dear @PoliceNG @PoliceNG_CRU @ndlea_nigeria what is NDLEA SWAT and why are they on the road with guns searching peoples phone?#WhatisNdleaSwat

Apparently the group has been in existence for a while now and have even been captured back in 2018 by a photographer on Getty Images. 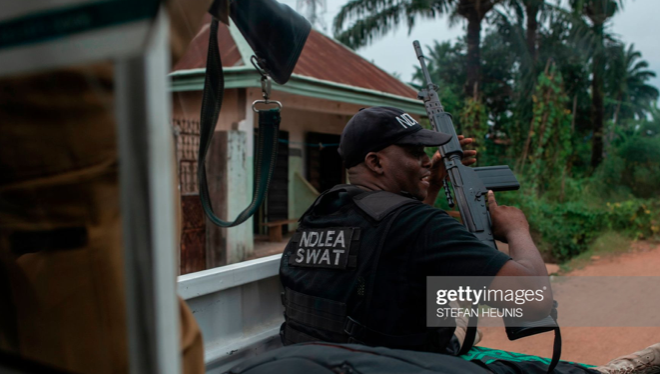 A member of the National Drug Law Enforcement Agency (NDLEA) SWAT sits on the back of a vehicle during a visit to a clandestine lab busted in November on November 22, 2018. – With access to lucrative markets to the south and east, and aided by porous borders and corrupt law enforcement, experts warn Nigeria is fast becoming a major player in the global methamphetamine market. (Photo by STEFAN HEUNIS / AFP) (Source: STEFAN HEUNIS/AFP via Getty Images)

Many Nigerians are also questioning the team and have gone on to share their dissatisfaction and anger at the unknown group.

EFCC is fighting cyber crime on the streets and NDLEA SWAT is searching for drugs in people's phone..

USA and the world should Sue Nigerian government for using and demeaning the ‘SWAT’ name.

Remember that the country is still healing from the #EndSars protest which left several dead and properties destroyed and vandalized and now this.

After #EndSARS we now have NDLEA SWAT on the road checking people's phones. That means we are back to square one. These ones do exactly what SARS were doing. Aluta continua! Victoria Ascertain!#EndSWAT pic.twitter.com/UGZHwdWEla

A SWAT team is a group of highly trained police officers who deal with very dangerous criminals. SWAT is an acronym that means Special Weapons And Tactics. SWAT officers carry weapons of higher caliber than most police officers do, such as machine guns, shotguns, and sniper rifles – Wikipedia.

OSG has reached out to the Police HQ and NDLEA HQ.

See other reactions below:

WTF is NDLEA SWAT? Just another rogue team coming up! Y'all better end that shit pic.twitter.com/5XUCpNPLb1

Please what is NDLEA SWAT?

May God help us in Nigeria.
So this is the new SARS now abi
They gave them new jersey and labelled it NDLEA SWAT abi

NDLEA SWAT this might be the next nightmare in this country , Ndlea Swat are going through people's Phone , @ndlea_nigeria this has to stop before it goes out of hand ? #EndSARS pic.twitter.com/34LSknDuot