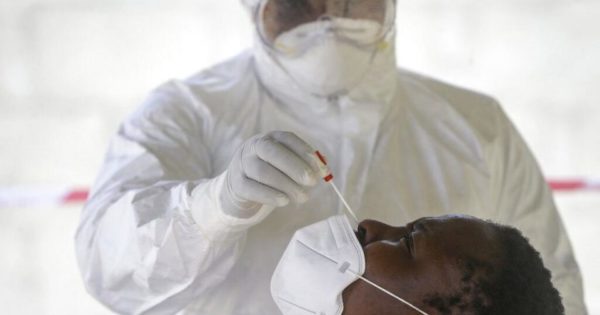 The Lagos, Ebonyi State Government and the Federal Capital Territory Administration (FCTA) have imposed a ban on large gatherings following the rapid spread of Covid-19 in Nigeria.

Governor David Umahi and the Minister of the Federal Capital Territory (FCT) Mohammed Bello, have also imposed the same restrictions in their states.

The governors said the restriction was meant to address the second wave of the virus, which rose to 77,013 on Friday, December 18, 2020.

Sanwo-Olu, who reinstated the 12 am to 4 am curfew imposed on the state by the Presidential Task Force on COVID-19 said event centres and night clubs reopened in reckless disregard for COVID-19 guidelines.

He said, “We cannot afford to relax the battle against COVID-19’, the governor described as overwhelming the non-compliance of places of worship with the guidelines in both their regular and special gatherings organised to commemorate the season.

All public servants from Grade Level 14 and below, except emergency workers and first responders, are to work from home as from Monday, December 21 for the next 14 days in the first instance.

Nightclubs have not been allowed to open yet. All nightclubs in Lagos must immediately shut down, until further notice. The midnight to 4am curfew imposed by the Federal Government remains in place. The protocol of ‘No Mask No Entry’ must be enforced by all public places: offices, businesses, markets, shops and so on.

Security agents have been mandated to ensure full enforcement, without exception. No one will be deemed to be above the law. Any and all breaches of these regulations and public health protocols will lead to immediate closure as well as attract heavy fines and any other sanctions and penalties deemed fit, in line with the Lagos State Infectious Diseases Control Regulation 2020.”

Burna Boy Is The Most Streamed Male ...