Rector Of Federal Polytechnic, Ede Suspended For Fixing A Bed In His Office 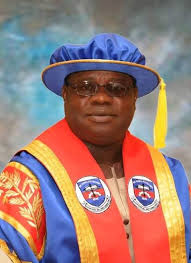 The Rector of the Federal Polytechnic, Ede, Osun State, John Adekolawole, has been suspended by the academic board of the institution for setting up a room in his office.

Mr Adekolawole was suspended on Friday 11 December. This was communicated to the members of the Academic Staff Union of Polytechnics (ASUP) by their chairman, Adekunle Masopa, at an emergency congress.

“The academic board accused the rector of flagrant dereliction of duty by absconding from office for about a month. He was also accused of the desecration of the highly respected office of the rector with the creation of a bedroom furnished with a king-size bed which has made it possible for him to be sleeping at work,” the ASUP chairman said.”

Your Self Esteem Issues Has Nothing To ...