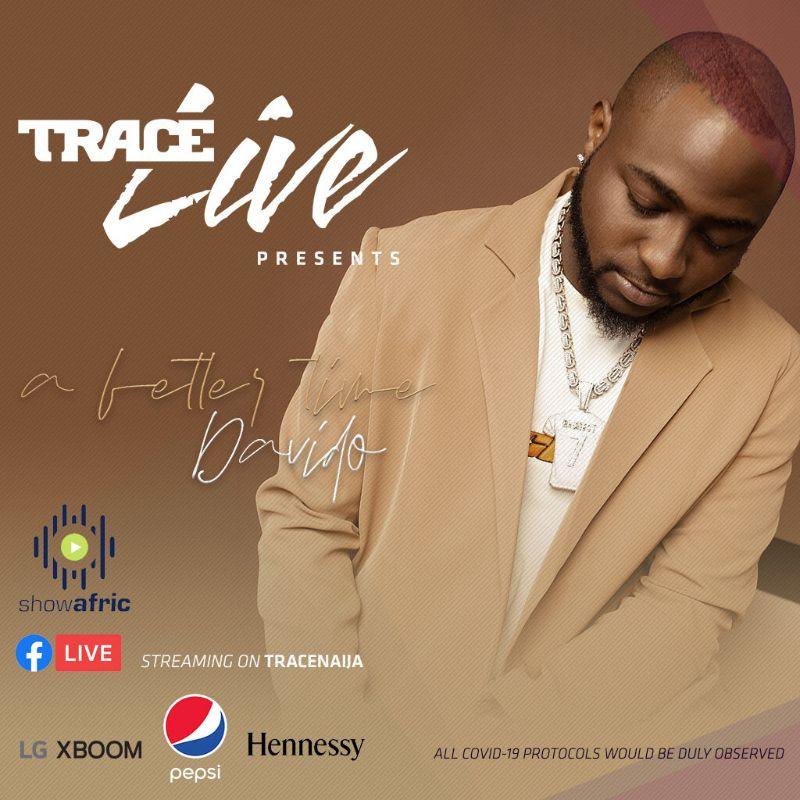 On Thursday, November 12, 2020, Trace, the number one music media entertainment platform, owner of TRACE Naija and 25 other Trace channels across Africa and the world, will stream an exclusive album listening and show with one of Africa’s top artists directly on their Facebook platforms. This is the first TRACE Live session after a seemingly unending downturn of events since the advent of the global Covid-19 pandemic.

This edition of TRACE Live headlines global superstar, award-winning singer, songwriter, and musician, Davido; who will take the audience through his music journey in an album-listening for his highly anticipated new album, “A BETTER TIME”, featuring collabos with a wide range of top stars including Mayorkun, Tiwa Savage, Sauti Sol, Sho Majozi and Nicki Minaj.

Fans of Trace and Davido can attend in person by winning extremely limited tickets on all TRACE Naija social media pages @tracenaija and stream live on Trace’s FB page @tracenaija.

TRACE Live, which began in 2017 with its first feature, Itsekiri vocal powerhouse, Omawumi, is a new landmark in live music that highlights only the best blend of vocals and musical instruments. The show which spotlights one artist and a band is the biggest live performance show from Trace. Artistes who have participated in past TRACE Live sessions include Flavour, Adekunle Gold, Falz, 2Baba, Wande Coal, Reekado Banks, Runtown, Simi, Reminisce, and Phyno.