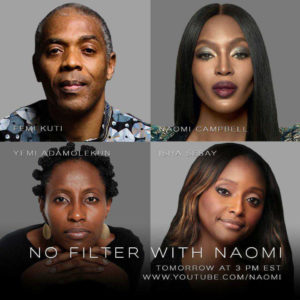 British International supermodel, activist, philanthropist, and now show host, Naomi Campbell is stirring the African pot in the coming episodes of her successful YouTube exclusive series ‘No filter with Naomi’, which doesn’t only host a wealth of well-known innovators in fashion, entertainment, and beauty;
it also celebrates humor, in-depth professional, and personal conversations.

For this special two-part interview episodes of ‘No filter with Naomi’, the host digs a little deeper when she speaks with Femi Kuti, first son of Afrobeat pioneer and legend, Fela Anikulakpo Kuti, known for speaking up against social injustices as delivered in high energy funk, jazz, and traditional songs about political corruption and poverty; Seasoned British journalist of Sierra Leonean descent, Isha Isatu Sesay known for working with CNN and her in-depth coverage of the “Chibok Girls abduction” as well as Nigerian elections that led to first Democratic presidential handover in the country’s history.
Also on this episode is Yemi Adamolekun,  Executive Director, Enough is Enough and campaigner for better governance in Nigeria as they discuss the recent uprising in Nigeria where, in a space of 12 days, hundreds of youth who peacefully protested against police brutality by a special unit of the police force – SARS (Special Anti-Robbery Squad), became part of the infamous “Lekki massacre” where the military allegedly shot into the crowd of defenseless protesters.

The second part focuses alone on Femi Kuti digging deeper into the conversation.

In the weekly series, the ageless beauty has a prodigious natural ability to resonate with her guests which makes ‘No Filter with Naomi’ more than just a show; it is an authentic hangout with the queen of the catwalk herself, a rare picture of a folksy Naomi at home and at ease with her guests even as the interactions take place from worlds apart, no thanks to the COVID-19 pandemic.