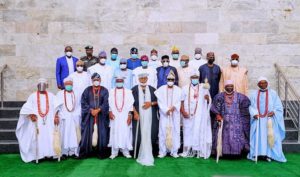 The Oba of Lagos, Oba Rilwan Akiolu, has been seen in public for the first time since his palace staff was stolen by hoodlums.

The monarch was spotted during a Peace Dialogue hosted by the Lagos State Government to tackle the issues that led to the recent nationwide protests. The King whose house was ransacked and looted, met with other monarchs as they deliberated over issues plaguing the state.

The rulers also expressed disappointment at the manner politicians had turned politics into money making ventures at the expense of the interest of the youth.

According to them, the high rate of unemployment among youths caused the agitation in the EndSARS protest. 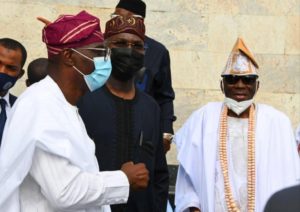