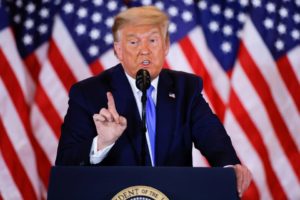 President Donald Trump responded to several news outlets calling the 2020 election for President-elect Joe Biden on Saturday with a statement, claiming that his campaign will start “prosecuting our case” in court come Monday in what would effectively be an attempt to overrule the will of the American people.

“We all know why Joe Biden is rushing to falsely pose as the winner, and why his media allies are trying so hard to help him: they don’t want the truth to be exposed,” the president said in his statement. “Joe Biden has not been certified as the winner in any states, let alone any of the highly contested states headed for mandatory recounts.”

The statement also falsely claimed that election observers were not allowed to observe the vote count in several states. 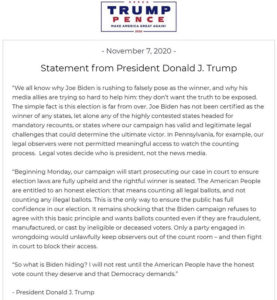