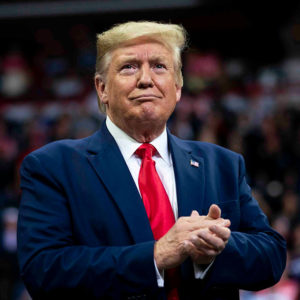 US President Donald Trump has been quiet on Twitter for most of election night, but fired off a number of tweets in the minutes after Joe Biden gave his address.

Mr Trump wrote that “we are up BIG, but they are trying to STEAL the Election. We will never let them do it. Votes cannot be cast after the Poles (sic) are closed!” 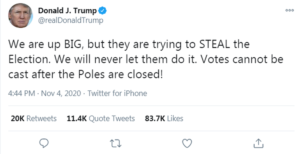 There is no evidence anyone or any party is attempting to ‘steal’ votes. He spelled the word polls wrong in his initial tweet, and quickly deleted it to correct his spelling. 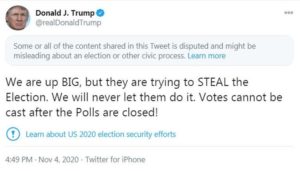 Mr Trump sent a second message declaring: “I will be making a statement tonight. A big WIN!”

His posts came moments after US Democratic nominee Joe Biden addressed a drive-in rally to say the winner would not be called tonight.