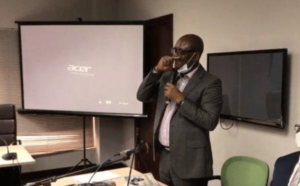 The Managing Director of Lekki Concession Company, Mr. Abayomi Omomuwasi, has said the surveillance cameras at the Lekki Toll Gate stopped recording at 8 pm and also his office is not responsible for the shooting incidence.

Speaking before the Lagos State Judicial Panel of Enquiry and Restitution for Victims of Special Anti-Robbery Squad (SARS) related Abuses and other Matters, Mr. Abayomi Omomuwasi gave a detailed explanation on how the surveillance cameras stopped recording, blaming it on network error.

“We never ever tempered with the surveillance camera until about 8 pm, when it was tampered with and stopped recording, the network was interfered with which stopped the recording”.

” The cameras that were removed at the Lekki toll gate were plate numbers recognition cameras, they identify the vehicle and vehicle type,”

According to him, he cannot confirm the number of casualties neither can he speak of the shell cases found at the Lekki toll gate.

” We usually put the light on at about 7:30 pm, our people left the location at 4 pm, everyone was asked to go after the curfew was declared”

” We obtained permission and asked all staff to go, including those in charge of the generator”

When asked if he agrees to the narrative that the governor ordered the attack on the unarmed protesters, he said;

” None of the Lekki Concession staff physically witnessed the shooting, we can only rely on the footage”

” I have no reason to invite armed security to the protest between 8-20, October when the protest started,”