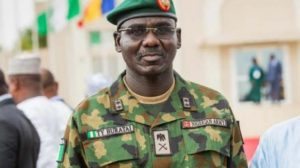 The Nigerian military after receiving backslash from both internal and international communities has decided to look into Lekki Shootings.

In a previous post, some military army fired shooting at unarmed protestors at Lekki Tollgate on 20.10.20.

The protestors were protesting over the brutal killing and extra-Judicial killing by the police.

But Minister of Defence Hon. Mansur Dan Ali in his statement in Abuja during a media conference said investigation is ongoing and reports will be would be available publicly for everyone.

He continue to hold that the videos on social media could be doctored or the alleged soldiers could be criminals dressed in camouflage after preminary investigations are set to begin.

However, the BBC reports has stated that Instagram live videos cannot be doctored or be fake

“I Had Expectations That By This Time ...