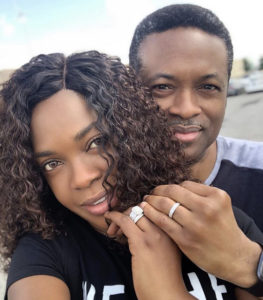 Actress Omoni Oboli has penned down a lovely and romantic message to her husband Nnamdi Oboli saying he’s the best thing that ever happened to her.

Celebrating her 20th wedding anniversary, Omoni Oboli has disclosed she could have made the biggest mistake of her life by marrying at the age of 21 but God gave her a better man.

According to her, everyone was worried when she was marrying him 20yrs ago as she was only 21 but she is happy and appreciative of marrying him.

Adding that she appreciates all the love he showers on her even though she sometimes gives him though time because she’s a coconut head girl most of the time. 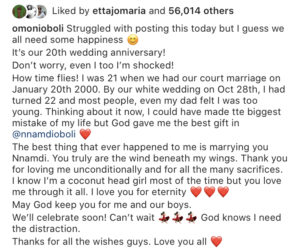 Khloe Kardashian Reveals She Had Coronavirus