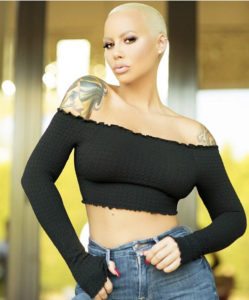 Popular American television star, Amber Rose, has revealed that she was in a violent relationship with her ex-boyfriend, Kanye West.

In an exclusive interview on ‘No Jumper’ podcast some days ago, Amber Rose kicked against the notion that she ‘soaked up’ any positive influence from Kanye West, but rather, he bullied her.