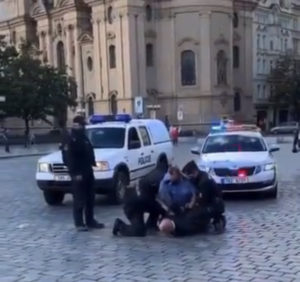 Nigerian in Czech Republic has join their voice to the youth in Nigeria to protest against the police brutality of killing ongoing in the country.

In the process of protest, white thugs decided to disrupt the ongoing protest in Czech Republic.

This made the protestors called the Czech Republic police to come to their aid.

From the video, one could see police officers arresting a white man in the midst of ongoing protest

Lewis Hamilton Lends His Voice To The ...