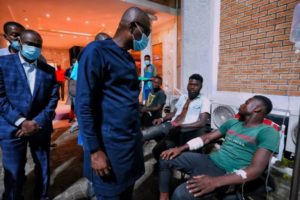 The Governor of the Lagos State, Babajide Sanwo-Olu, paid a visit to victims of the Lekki Toll-Gate shooting massacre on Tuesday night October 20.

Babajide Sanwo blamed the shooting at peaceful and unarmed protesters at by security agents believed to be military men on ‘forces beyond control’ adding in a long statement that the incident has etched dark notes in the state’s history.

The lawmaker took to his Instagram page and shared photos of his visit at that the hospital on Wednesday morning where protesters who sustained various injuries as a result of the shooting were receiving treatment and assured to take responsibility of their medical bills.

#ENDSARS: ‘I Support Your Strength And Not ...