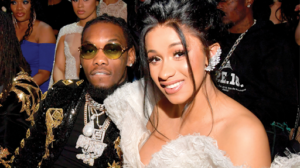 American rapper and mother of one, Cardi B has made a U-turn to reconcile with her baby daddy, Offset after initially announcing their divorce.

Cardi B revealed in an in Instagram live session claimed she misses Offset because of his d!ck  adding that it is difficult not talking to your best friend.

You would recall that on Cardi B’s 28th birthday, she was seen happily dancing on top of Offset and kissed him after Offset bought a customized Rolls Royce for her as her birthday gift.

“When people be saying I be doing s**t for attention, with this and that, no, I’m just a crazy b***h. One day I’m happy, the next day I wanna beat a nigga up… I just be starting to miss [him]…

People saying that I took him back and I’m materialistic, I like material things but what do you want me to do? Take a Rolls Royce and then I [ignore] him? No I really wanted a Rolls Royce.

We’re just two really young motherf*****s who got married early and that’s what we are.

We’re not no different than y’all f*****g dysfunctional a*s relationships. We the same way.’