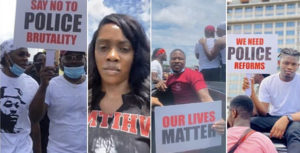 The Lagos edition of the #EndSARS peaceful protest, led by Runtown and Falz has been held.

According to him, their next protest which is on Tuesday will not be peaceful as this one if nothing is done by ending the activities of SARS on their streets as people have endured so much from them.

Many Nigerian celebrities joined the march with hundreds of concerned Nigerian youth as they demanded an end to SARS.