President Trump Returns To White House, Despite Still Being Infected With COVID-19 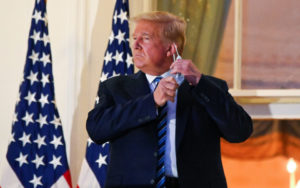 U.S. President Donald Trump pulls off his protective face mask as he poses atop the Truman Balcony of the White House after returning from being hospitalized at Walter Reed Medical Center for coronavirus disease (COVID-19) treatment, in Washington, U.S. October 5, 2020. REUTERS/Erin Scott

President Donald Trump checked out of hospital Monday after four days of emergency treatment for Covid-19, pulling off his mask the moment he reached the White House and vowing to quickly get back on the campaign trail.

Shortly beforehand, Trump had tweeted that Americans, who have lost nearly 210,000 people to the virus, have nothing to fear.

After landing in the White House, he walked up the steps onto the South Portico’s stately balcony, demonstratively removed his mask and offered a 23-second salute to the departing Marine One.

With less than a month until Election Day on November 3, polls show Trump trailing Democrat Joe Biden. The president’s hospitalization left him scrambling even harder to catch up.

The return to the White House was minutely stage-managed to show he is physically fit, while a series of striking tweets demonstrated Trump’s coming angle of political attack: that he personally beat Covid and will now lead the country to its own comeback.

“Will be back on the Campaign Trail soon!!!” he said in one tweet.

“Don’t be afraid of Covid,” he said in another, claiming to be feeling rejuvenated after his illness.