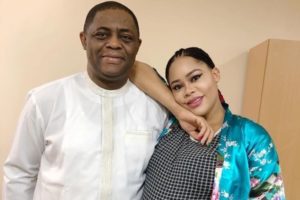 According to media reports, they dissolved their marriage due to domestic violence.

In the video, Femi engaged his ex-wife in an argument which saw him move steadily towards her. Apparently, Precious was recording him on camera while he rants and hits the phone in her hands.

In the video shared by Sahara Reporters TV, Femi was seen walking towards his wife, saying she likes scandals and insults, “everyone wants peace but for you it must be insult”.

Before she could say more, Femi hit the phone in her hands through the window where she said  “leave me alone, stop abusing me”.