Kiddominant Becomes the First African Music Producer To Get A RIAA Plaque As Davido’s ‘Fall’ Hits More Than 500,000 Sales 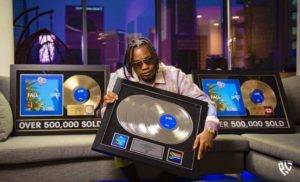 This is due to the record-breaking sales Davido’s ‘Fall’, which he produced, made. As stated on the plaque, the hit music, ‘Fall’ by Davido has made more than 500,000 sales worldwide.

Kiddominant has taken to his Twitter page to announce this groundbreaking achievement and to offer a word of encouragement to other African producers and songwriters.

First ever RIAA Plaque for an african song! Hope to see more african producers & songwriters achieve this. Dream it, Then Real life it ???? pic.twitter.com/zQ1lIXXS3v