Former Governor of Ekiti State, Ayodele Fayose has said that the only thing that will give Nigerians joy as the country turns 60 today will be the announcement of the resignation of President Muhammadu Buhari, adding that the country is presently in a coma and on life-support. 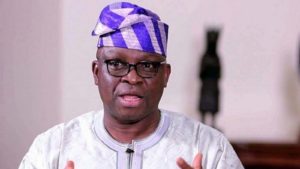 He also mentioned that there is nothing to celebrate in a country bedevilled with insecurity, hunger, bare-faced corruption and bad governance, and also added that President Buhari’s resignation will serve as a life-restoring parting gift for Nigerians.

This was conveyed in a statement by his spokesperson, Lere Olayinka, in his message to mark the occasion of Nigeria’s 60th Independence Anniversary.

Fayose’s comment was due to the directive given by the Nigerian Police Force stopping the planned RevolutionNow Protests by Omoyele Sowore. He said “It is no longer a democracy when people can not ventilate their grievances against government freely.”

He mentioned that the Police’s directive that any form of rally or protest from any group of persons will not be allowed today “is a naked display of crudity and affront on the constitution of Nigeria, which guarantees Nigerians rights to associate and express themselves against the government.The government is for the people and not the people for the government. It must therefore be accountable to people,” he said.

“The police must also be mindful of the fact that they are part of the society. They have wives and children who are also being affected by this rudderless government under which a bag of rice rose from N7,000 in 2015 to N32,000 now.The reality is that Nigerians are not happy with the present situation of the country. More so that this present government appears to be the worst in the history of Nigeria.

“Nigerians are not happy about the debts accumulated by this government because they can’t see anything being done with the money borrowed. They are angry that they can no longer go to their farms, travel on the roads and even sleep in their homes without the fear of being kidnapped, killed or raped by armed bandits.

Nobody wants Nigeria to disintegrate. Rather, Nigerians want to live their lives normally without minding which party is in government, and as it appears, living in Nigeria has been made extremely difficult by this government. Painfully, most of those who are desirous of leaving the country for greener pastures abroad are unable to do so because advanced countries are banning Nigerians from coming to their countries. The already weak shoulders of Nigerians are being made to carry too much burden and they have rights to show their displeasure,” Fayose added.

Nigerian Bukayo Saka Called Up to the ...