Edo Gubernatorial Elections: Ize-Iyamu Vows To Exhaust His Rights Under the Law

The All Progressive Congress (APC) candidate during the recently-concluded Edo Gubernatorial Elections, Pastor Osagie Ize-Iyamu, has hinted that he might go to court if the Peoples Democratic Party (PDP) refuses to discontinue the various cases it instituted during the pre-election period against him and the party. 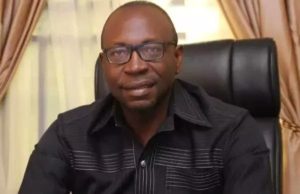 He said this in his Independence message to the people of the state, and noted that even though there has been appeals from various quarters for him to let bygone be bygone, the possibility of litigation over the election was not ruled out.

“We have all played our parts as lawful citizens and unrepentant democrats. Even as we speak, our people should know that PDP and their agents and privies have instituted 13 lawsuits against my running mate and I. None of them have they discontinued after the election. So, if the PDP don’t pass up their rights under the law, why should we, in APC, do so?” Ize-Iyamu asked.

“We are busy collating our facts. Only after, can we speak and speak authoritatively, in the best tradition of rule of law, fairness to all and due process. We will brief you all in good time and that time is near. In the course of our methodical approach, not a few deem to have preempted our course of action; and pleaded that we do not proceed to the courts to challenge the election results. While that cannot be dismissed as an entirely bad plea, what I can say is that whatever action we subsequently take would be rooted in due process and the rule of law. We will exercise every right available to us under the law, given the electoral facts at our disposal,” he added.

He also praised President Muhammadu Buhari “for providing a level playing field, for all candidates, irrespective of party affiliations.” He said, “At least, after the Edo election, democracy wasn’t declared to be in an intensive care unit (ICU), as our PDP friends would have shrieked, had they lost the election! That is the democratic spirit the president displayed during and after September 19. I pray and hope that our friends would remember – indeed, inculcate – that spirit, and wean themselves from their win-at-all-costs mentality.”

He also praised the members of the APC who resolutely stood by him. He said, “We will forever appreciate your devotion and sacrifice. You did your noble duty and did enough to enhance our cause. We cannot thank you enough. But then, the question is after September 19, what next? We owe you an explanation of the way forward. Indeed, not a few have been bombarding us with this question. Well, we have kept quiet so far, not because we are bad losers, as some unfairly presume. It’s rather because, no matter the situation, we are staunch soldiers of the rule of law and due process,” he added.

He further emphasized that the party is at liberty to pursue any legal option they deem fit, so long as the peace of Edo State is not threatened. He also thanked the Benin monarch, Omo N’Oba N’Edo Uku Akpolokpolo, Oba Ewuare II, and other revered royal fathers and promised that he will never take his love, and wisdom and striving for our unity, for granted.