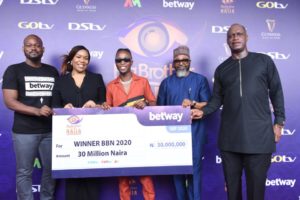 After 71 days of intense drama and competition, the BBNaija Season 5 came to an end on Sunday 27th of September 2020.

Olamilekan Agbelesebioba popularly known as Laycon emerged winner after scoring the highest votes in the final week of the BBNaija Lockdown Edition.

The 26-year-old was awarded his gifts at a prize presentation ceremony held earlier today at the MultiChoice studios in Lagos. Where he was presented with the cash prize of N30m, an SUV and a two-bedroom house. Also mentioned was a N5m prize from Betway awarded to Laycon and Ozo on their MAD Sports initiative, and all-expense paid trip to the Guinness House Dublin for Dorathy and Laycon.

Laycon, who made history with over 60 percent of the Big Brother Naija final votes, thanked the organizers, fellow housemates, family, fans and sponsors of the event. “I don’t know what to say, I love you guys very much,” he said. When asked about his plans and projects after the house, Laycon disclosed that he intends to work on projects that will impact the society positively.

Speaking at the Prize presentation, the Chief Executive Officer, MultiChoice Nigeria, John Ugbe said, “Planning a show of this magnitude during these times was not without its challenges. For one, we resorted to holding virtual auditions where we received over 30,000 video entries, from which the “Lockdown 20” were selected.” Mr Ugbe added that Big Brother Naija has changed the way we define employment and relevance.

In addition to participants being instant celebrities and influencers, other industries have been significantly impacted by the show and its participants. He also disclosed that over 900 million votes were recorded across SMS, Mobile, Website and the DStv & GOtv Apps.

Channel Director, Africa Magic, Wangi Mba-Uzoukwu also stated that the level of engagement for this season was off the chain while appreciating the housemates for bringing the drama and keeping the viewers tuned to the channel.