The Ekiti State House of Assembly has passed the bill for the upgrading of the State College of Education in Ikere-Ekiti to University of Education, Science and Technology today, 28th September, 2020. 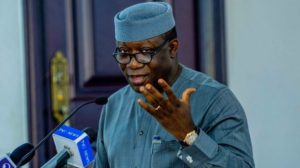 The bill was passed through an unanimous resolution at Tuesday’s plenary in Ado-Ekiti presided over by the Speaker, Mr Funminiyi Afuye.

This was followed by the submission of the report of the House Committee on Education, Science and Technology headed by Mrs Kemi Balogun. The report states that the Transitional Provision of Section 38 would give room for the existing students of the College of Education after the effective date of the law to complete their course of study as stipulated.

The Executive bill, which has already been passed into law, was titled,” A Bill for a Law to provide for the Establishment, Incorporation, Constitution, Powers and Functions of the University of Education, Science and Technology, Ikere-Ekiti and Other Matters Therewith. ”