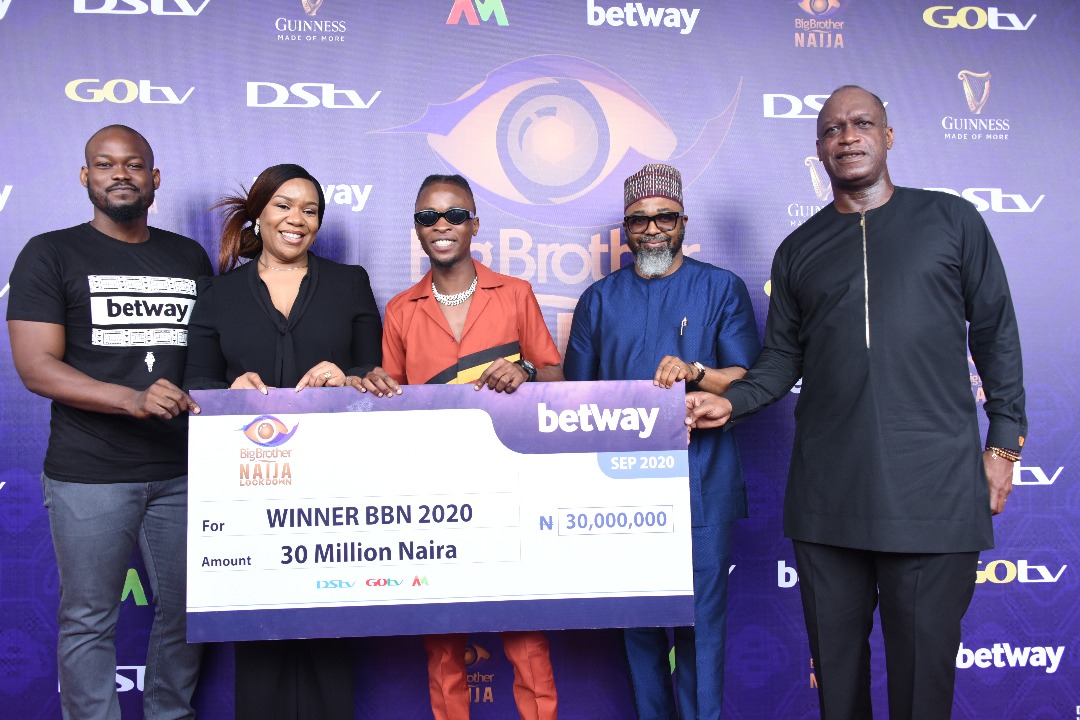 Entertainment and online gaming platform, Betway has just announced that it will be committing the sum of 5 million Naira to Big Brother Naija housemates Ozo and Laycon’s Sports Development initiative. The announcement was made by Chris Ubosi, the Local Director, Betway Nigeria during the winner’s prize presentation ceremony which aired live on Africa Magic on Wednesday, September 30, 2020.

Ozo and Laycon emerged winners of the BetwayMAD task which took place on Friday, September 19 during the Big Brother Naija show. For the task, the housemates were tasked to debate in favour of any initiative of their choice that they felt would make the most positive impact on the development of Nigeria.

The housemates were divided into teams. Ozo and Laycon were paired; Dorathy, Neo and Trikytee worked together and Nengi and Vee made up the last team.

Each team got a different cause to support and argue for. Laycon and Ozo got the sports initiative, the trio of Dorathy, Neo and Trikytee were to argue in support of food security, while Nengi and Vee were arguing to support the Gender Based Violence initiative.

The debate session was divided into three sessions, with specific instructions from Biggie. The first part of the debate gave the housemates time to argue for their cause, the second session they argued against one another’s topics, while they had the third part for rebuttals and final statements.

After a week of deliberations by the panel of judges which included Dr Yewande Ntekim-Rex and respected music producer and Betway ambassador, Don Jazzy, Betway today announced that team Sports Development, made up of Ozo and Laycon, is the winner of the task. The team got a cash prize of 500,000 Naira in addition to their initiative being funded by Betway.

Betway is aware of its corporate responsibilities and takes it seriously. The Making A Difference (MAD) initiative is one of the many ways the premium online entertainment brand is giving back to the Nigerian community.