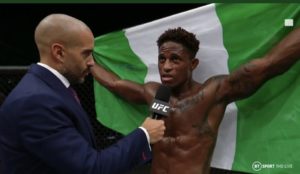 Hakeem won the UFC253 clash held at the Flash Forum on Yas Island, Abu Dhabi after three rounds. He could be heard screaming to his opponent to stop running during the fight, an indication that he was too tough.

Flying the Nigerian flag after his victory, Dawodu said: “They only allowed me to bring one flag, so I’m really sorry for not bringing the Jamaican and Canadian flags but you know what I represent.”