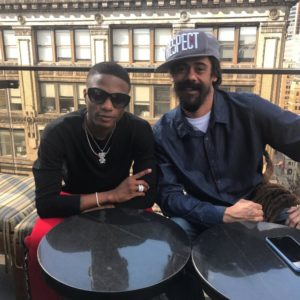 Nigerian singer Wizkid has revealed that among the tall list of A- list international artistes he has ever worked with, Damian Marley is the one who struck his heart of heart.

Wizkid was engaged in an interview with the newly debuted red radio site where he spoke at length about how he felt when he worked with artiste like Beyonce and the expectations for his yet to be released studio album.

He worked with Damian Marley on his Made In Lagos Album and described his studio sessions with him as legendary and very unique owning to the fact that he is a very down to earth person.

He was quizzed about the artiste to ever make him feel star struck. He replied, “Star struck ke? I don’t get star struck by anybody. working on that song was amazing you know, she’s one of the most amazing performers to have ever done it. But star struck? I (only) think I was star struck when I met Damian Marley.”

“That was a spiritual moment, he’s one of the realest people that I have ever worked with” he added.

Seyi Tinubu Prays for His Daughter As ...

BBNaija: Nengi Wept After The Party, She ...