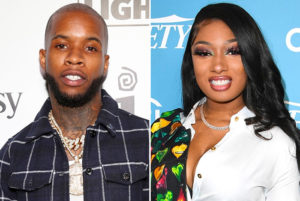 After months of silence, Tory Lanez has denied allegations that he shot fellow rapper Megan Thee Stallion in an incident in the Hollywood Hills.

The Canadian artist took several harsh digs at the “WAP” hitmaker in the lyrics of his latest album, which dropped Thursday night. Megan Thee Stallion underwent surgery for a gunshot wound in July, according medical records, and has spoken at length about the incident on social media.

“We have been made aware of manipulated text messages and invented email accounts that have been disseminated to the media in a calculated attempt to peddle a false narrative about the events that occurred on July the 12th,” Spiro wrote on Friday. “A smear campaign can’t change the truth.”

Megan Thee Stallion officially named Lanez as her attacker last month while accusing him and his team of “lying” about the incident. The L.A. County district attorney’s office is reviewing a potential charge of felony assault with a firearm in connection with the case, which is still under investigation.

Davido Welcomes A New Member To The ...