Nobel Peace Prize Ceremony Scaled Back Due To Coronavirus Pandemic

The head of the Norwegian Nobel Institute, Olav Njolstad has announced that the Nobel Peace Prize Ceremony this year will be scaled back due to the Coronavirus pandemic. 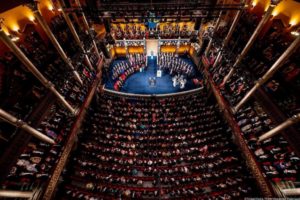 Unlike previous years, this year’s ceremony will not be held in the main room of Oslo’s City Hall, which can accomodate 1,000 guests, but in the auditorium of Oslo University, which can only host around 100 people. Secondly, the banquet usually held in honour of the Nobel laureate the same evening has been cancelled.

Olav Njolstad also confirmed to pressman that it is not yet certain whether this year’s laureate or laureates will be able to travel to Oslo to accept the prestigious prize in person, as the Nobel Institute is also considering holding an online ceremony, with an in-person invitation postponed until next year.