Following the helicopter crash at Opebi Lagos, the Accident Investigation Bureau has concluded its preliminary investigations on the reason for the crash and has released an initial report. 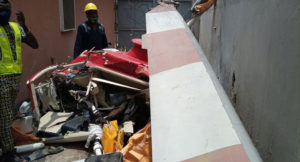 The report reveals that the helicopter did not have fuel onboard as at the time of the crash. The report reads as follows: “On August 27, 2020, a Bell 206B III helicopter with nationality and registration marks 5N-BQW, operated by Quorum Aviation Limited, was topped up with 247 litres of fuel to full tank capacity on ground Port Harcourt Military airport (DNPM).

“The helicopter engine was started at 09:15h. The helicopter took off at 09:20h. The helicopter crashed at 12:14h. There was no fuel left in the fuel tanks after the crash. The mast and main rotor blades were found intact during the post-crash inspection.”