Governor Sanwo-Olu Shows Off His Dribbling Skills With Asisat Oshoala

Nigerian female footballer, Asisat Oshoala has paid the Governor of Lagos State, Babajide Sanwo-Olu a courtesy visit, where they both talked about her plans for her foundation (the Asisat Oshoala Foundation). 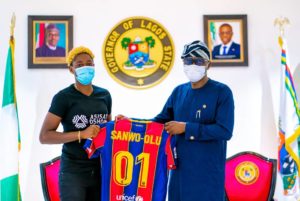 This was disclosed in a tweet by the Executive Governor of Lagos State, Babajide Sanwo-olu who wrote, “Today, @AsisatOshoala paid me a courtesy visit. She is a worthy ambassador of Lagos from Ikorodu & we are proud of her. She spoke about her plans for the Asisat Oshoala Foundation and I promised to support her.”

Sanwo-Olu also disclosed that they kicked the ball for some time, which he further corroborated with pictures where he was seen displaying his dribbling skills.

See the pictures below: 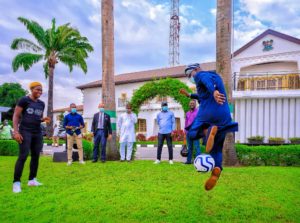 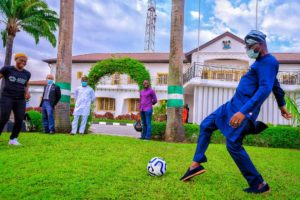