The Independent National Electoral Commission has announced the victory of the Peoples’ Democratic Party’s candidate, Godwin Obaseki at the Orhiomwon Local Government Council, which is where the All Progressives Candidate, Ize-Iyamu hails from. 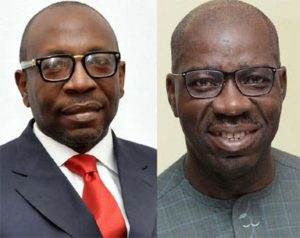 While Osagie Ize-Iyamu was only able to garner 10,458 votes, Godwin Obaseki garnered 13,445 votes.