Chrissy Teigen has revealed the sex of the third child she is expecting with John Legend in what looked like an accidental slip on her Instagram story. 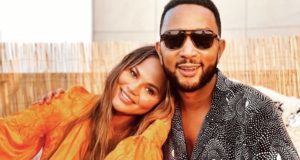 She shared, “”I wanted to update you. My placenta sucks. It’s always been kind of the bad part of my pregnancies with Luna. With Miles, it just stopped feeding him, it stopped taking care of him. I was stealing all his food because I was getting huge but he wasn’t getting big at all. He had to come out early and Luna had to come out early. I was induced both times. Anyways, it’s super weak. The baby is really, really healthy and he is big!”

Noticing that she used “he” to describe her baby, she covered her mouth and said, “I am stupid.” She however continued to state that she will continue her two-week long best rest because her placenta is really weak and it’s causing her to bleed a lot.