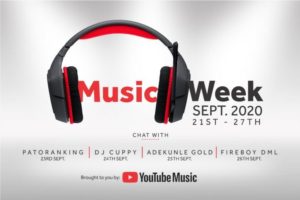 YouTube has announced that Patoranking, DJ Cuppy, Adekunle Gold and Fireboy will be headlining a virtual hangout to mark its music week.

The video-sharing platform broke the news in a statement on Saturday.

It said the event will run from September 21 to 27 towards celebrating Nigerian music and singers.

“Megastars Patoranking, DJ Cuppy, Adekunle Gold, and Fireboy DML will be interacting with their fans on the 23rd, 24th, 25th, and 26th of September, respectively,” the statement read.

“Virtual hangouts with top Nigerian music stars will take place over four days during the week. The artists will leverage the platform to share some of their interesting plans with their fans.

“Beyond celebrating the talent demonstrated by Nigerian music stars, the goal of YouTube Music Week is also to showcase top artists and songs making waves on the YouTube Music platform.

“Other fun features on YouTube Music like lyrics, playlists, background play, availability of remixes, and covers will also be highlighted.”

Launched earlier this year in an event graced by indigenous singers, the platform noted that its new YouTube Music reinforces its commitment to support the growth of music in Nigeria.

It personalises official songs, albums, playlists, and artist radio alongside catalogues of remixes, live performances, covers, and music videos not found elsewhere but organized on the platform.