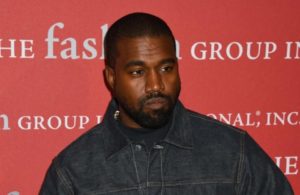 Kanye West has shared shocking footage of himself urinating on a Grammy Award as he ‘goes into battle’ against labels Universal and Sony to try and retrieve the rights to his own music.

The rapper, 43, posted the vision to his Twitter feed on Wednesday afternoon, which showed one of his 21 Grammys placed inside of a toilet bowl.

‘Trust me… I WON’T STOP,’ West captioned the clip, which referred to his current bid to gain ownership of his masters – otherwise known as the copyright to his original songs.

It came amid a Twitter rant that lasted several hours, during which he violated the social media site’s code of conduct after he shared the personal contact details of a magazine editor he called ‘a white supremacist’.

‘If any of my fans want to call a white supremacist… this is the editor of Forbes,’ West wrote above the phone number of the publication’s editor Randall Lane.

West has repeatedly hit out at the magazine in the past for failing to label him as a ‘billionaire’. Twitter took 30 minutes to hide the tweet with Lane’s details, which has now been deleted.

In a separate tweet, the star also joked that his wife, Kim Kardashian, would represent him in legal proceedings.