The Joint Health Sector Unions (JOHESU) has ignored the Federal Government’s directive and has proceeded on a nationwide strike today. 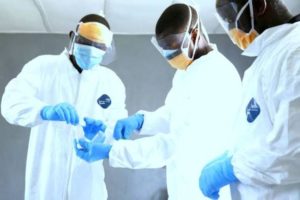 The same memo has been sent to the Minister of Labour and Employment, Dr. Chris Ngige and it reads as follows, “Recall that at the end of the meeting held in your office on Thursday, September 10, 2020, JOHESU demanded that the outcome of the meeting between JOHESU and the Federal Government be reported back to our expanded NEC meeting and give feedback to the Federal Government within 48 hours.

“In the light of the above, the meeting of our expanded NEC was held today, Saturday, September 12, 2020. And at the end of the meeting, which was held both physically and virtually, it was unanimously agreed that since nothing concrete was achieved at the said meeting with the Federal Government, that the strike notice is still germane and alive.

“Therefore, the 15-day ultimatum still subsists and with effect from midnight of Sunday, September 13, 2020, our members shall withdraw their services due to Federal Government’s inability to meet their demands.”

In reaction to the strike notice, the Federal Government has declared the strike “unnecessary, ill-timed and illegal.” This was stated in a statement signed by Mr. Charles Akpan, the Deputy Director of the Press and Public Relations in the Ministry of Labour and Employment. The statement partly reads as follows, “Parties in disputes are expected not to arm-twist, intimidate or foist helplessness on the other party while negotiations are ongoing as per sections 8 and of the Trade Dispute Act, 2015 barring any strike when the matters are before a conciliator and undergoing conciliation.

“Any strike now is inimical to an equitable settlement of the dispute, bearing in mind, especially, that this is a grave period of a pandemic where the Federal Government has spent about N20 billion to pay April/May 2020 and an additional N8.9B for June 2020 on COVID-19 hazard and inducement allowances, respectively, to all categories of health workers that are mainly JOHESU members.”

The Federal Government also urged JOHESU to have a rethink by putting the welfare of the patients and Nigeria first.