TRACE MINT: THE NEW CURRENCY TO GET INTO THE SPOTLIGHT 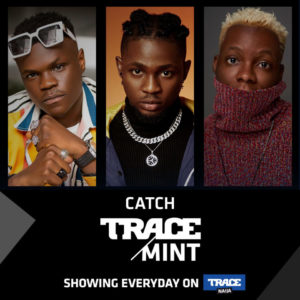 From the beginning of time in music, Trace’s mission has always been to empower and connect artists, fans and brands worldwide, leveraging Afro-urban entertainment, their audience and influences. This mission has never wavered but with recent evolutions in digital artistry, Trace has now widened their scope through a mix of new and existing services in Music and Entertainment.

Trace, therefore, brings you its exciting new package for up and coming artistes who have the talent to change their entertainment destiny in the show, ‘TRACE MINT’.

Trace Mint is an editorial that gives you the best insight into the new generation of Nigerian Talents; a jovial interaction between the artiste and the camera. To get the attention of the audience, upcoming artistes talk about their style of music in an easy, jivy, breezy,  lighthearted and laidback manner.

With a self-presentation style and airing on all Trace channels, the artiste sells themselves in a quiet competitive manner and the ball is basically and strategically in their court. With Trace’s new innovation ‘Trace Mint’, talented fast-rising artistes now have the platform to ‘blow’, to burst out as the next big thing in entertainment and there will no longer be an excuse for would-be superstars.

Some of the today’s top entertainment wave-makers who have achieved musical success through the Trace Mint platform include popular artiste ZLATAN, OMAH LAY, STARBOY TERRI and BARRY JAY. If you don’t take this chance to become a superstar, what’s your excuse? So when Trace says it’s got you covered in these trying times, nor be lie, ‘Trace Dey for You’. Trace Mint is the new eternal sunshine for the now generation.