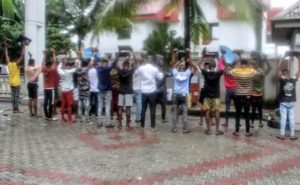 22 suspected internet fraudsters have been arrested in Owerri by operatives of the Uyo zonal office of the Economic and Financial Crimes Commission, (EFCC).

The suspects will be charged to court as soon as investigations are concluded.

Don Jazzy Celebrates His Mother As She ...

Davido Back With A New Song “Fem”