‘If Kiddwaya Wins BBNaija Lockdown Edition, Half of The Money Will Be Given To Erica’ – Terry Waya Hints 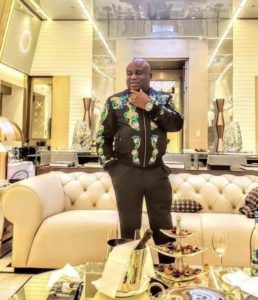 Nigerian Billionaire Terry Waya has said that if his son, Kidd Waya should win the BBNaija grand prize money of N85 million, he will make sure he gives half of it to Erica. Terry Waya disclosed this to Ghana-based Nigerian business mogul and boss Ovation Magazine boss, Dele Momodu, days after his son’s love interest, Erica got evicted from the BBNaija house.

Terry Waya, the father of BBNaija housemate Kiddwaya who’s entangled in a love web with Erica, also passed commentary on her disqualification.

“I’ve never watched the show before. But this year, because of my son, I started watching it. Unfortunately, on the day of that incident, I was hosting people to dinner. So, I didn’t watch what transpired that Saturday.

“But the following day, when I saw the eviction period and when I saw a lot of things that were going on on Facebook, I felt very bad. I saw in Erica a very smart girl who was so protective of my son. She showed my son genuine love, friendship and protection. At a point, she was ready to sacrifice her existence in that Big Brother house so that my son will feel comfortable.”

He continued: “She picks quarrels with housemates whom she felt were not nice to my son. She really stood behind him and I appreciate that so much because as a father you’ll be happy with someone who will protect your child.”

He went on to reveal that Kiddwaya is a carefree person who does not trample on others to achieve his objective.

“But Erica being cleverer and smarter was able to see behind the scenes the same people whom he was always smiling, joking and laughing with were not reciprocating the feelings he has for them. She knew it and took it upon herself to defend him. Because of my son, a lot of housemates started hating Erica. To me, she’s a wonderful person,” he said.

“If my son should win, I will make sure he gives her half of the money and the rest to charity,” he added.