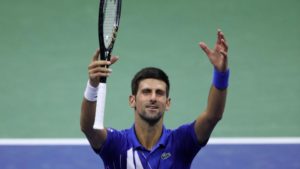 It was a stunning end to Djokovic’s bid for an 18th Grand Slam title following a 26-0 start to the season.

“In accordance with the Grand Slam rulebook, following his actions of intentionally hitting a ball dangerously or recklessly within the court or hitting a ball with negligent disregard of the consequences, the U.S. Open tournament referee defaulted Novak Djokovic from the 2020 U.S. Open,” the U.S. Tennis Association announced.

“Because he was defaulted,” the USTA statement continued, “Djokovic will lose all ranking points earned at the U.S. Open and will be fined the prize money won at the tournament in addition to any or all fines levied with respect to the offending incident.”

With 2019 champion Rafael Nadal and Roger Federer not in the field this year, Djokovic arrived in New York as the overwhelming favorite.

But it all came apart Saturday at Arthur Ashe Stadium, when Djokovic had just lost a game to his opponent, Pablo Carreno Busta, to fall behind 6-5 in the first set. 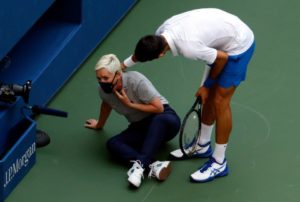 As he walked to the sideline for the changeover, Djokovic smacked a ball behind him. The ball hit a line judge, who dropped to her knees at the back of the court and reached for her neck.

After a discussion of several minutes with officials on court, including tournament referee Soeren Friemel, Djokovic walked over to shake hands with Carreno Busta. Chair umpire Aurelie Tourte then announced the default.