China Shows Off Covid-19 Vaccines For the First Time

China has displayed its homegrown coronavirus vaccines at the China International Fair for Trade in Services in Beijing for the first time. The vaccines, produced by the Chinese companies, Sinovac Biotech and Sinopharm, were contained in small vials. 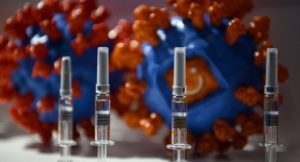 Even though the vaccines are yet to hit the market, there are hopes that they will be approved after the vaccine must have gone through the phase 3 trials. Speaking on the vaccine, a Sinovac representative said that his firm has already “completed the construction of a vaccine factory” which is able to produce 300 million doses a year.

According to China’s nationalistic tabloid Global Times, “the price of the vaccines will not be high”. Every two doses should cost below 1,000 yuan ($146), the report said, citing Sinopharm’s chairman, who told the media he has already been injected with one of the candidate vaccines. The China’s official Xinhua news agency also reported that another vaccine candidate, developed by Chinese military scientists, can deal with mutations in the coronavirus.

As of last month, at least 5.7 billion doses of the vaccines under development around the world had been pre-ordered. The World Health Organization has however warned that widespread immunisation against Covid-19 may not be available until the middle of next year.

Tokyo Olympics Will Hold Next Year “With ...