Following Erica’s actions in the house after the party last night, Nigerians have taken to Twitter to express their diverse reactions, with some calling for her immediate eviction. See some of the reactions below; 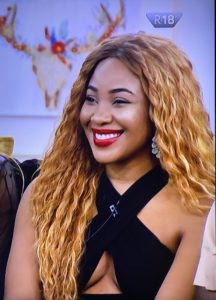 If we are talking about Mental Health, the person who needs it most is Laycon. Because ignoring everything Erica said last night is out of ordinary, he is hurting but wouldn’t break down. Laycon’s mental health matters.

The eventual loser will be Erica. Cos from all indications, Laycon and Kiddwaya are going to be very tight Gees after the show and I don't see her in the equation beyond the show. Except they just want to sell forced narrative to us just for PR like Wathoni and Brighto now.

Erica knew she had messed up yesterday then threw in the ultimate victim card.. “I’m not supposed to be here, my parents made a mistake and I’m here”.

How do you blame your lack of tact and emotional control on your parents for giving birth to you????

After getting good fans, Erica used her insecurities to drag herself down!
She want serious relationship with Kidd but she have forgotten his families are watching and seeing the kind of person their son want to bring home. Anger na bastard ooo!
Biggie Ceec Erica Laycon Tobi pic.twitter.com/ovbtf4ovbD

Erica was not even drunk in my opinion
The last time she was drunk when laycon was trying to look after her, we knew how she was weak to even speak or walk