The Federal Government has approved the establishment of the Accident Investigation Bureau (AIB) in the country. This was confirmed by the AIB Commissioner, Mr. Akin Olateru who also said that the Bureau will be partnering with the Nigeria College of Aviation Technology (NCAT) in Zaria. 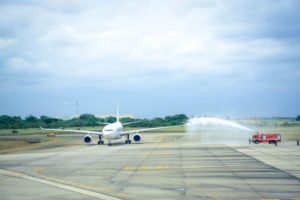 The Commissioner also explained that it had drawn up a curriculum from Cranfield University, Singapore Aviation Training Institute in furtherance of its plans to establish a world-class training school, which the Bureau also hopes to be a platform of generating revenue.

Mr. Akin Olateru further stated, “We had signed a Memorandum of Understanding (MoU) with the University of Lagos, University of Ilorin and another University in the United Kingdom. We hope to sign such MoU with more Nigerian agencies such as the Nigerian Navy and Lagos State Emergency Management Agency (LASEMA).”

Furthermore, Mr. Akin Olateru stated that the Bureau presently has 36 trained air safety investigators, who had been training at the Nigerian College of Aviation Technology (NCAT) while others were at Cranfield University in California and Singapore Aviation Training Institute.