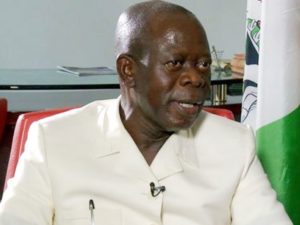 Two policemen attached to the a former governor of Edo State, Adams Oshiomhole, died on Tuesday, while two others were in critical condition when an articulated vehicle lost control and ran into Oshiomhole’s convoy near Oluku junction in the Ovia North-East local Government of the state.

Oshiomhole was on his way to Usen to join the All Progressives Congress campaign train when the accident occurred.

It prompted the candidate of the APC in the September 19 Governorship Election, Pastor Osagie Ize-Iyamu, to call off his rally in Usen.

A statement by Oshiomhole media team said the accident occurred one  minutes past 12pm.

“The convoy was headed to Usen Community in Ovia South West Local Government Area of Edo State, where Comrade Adams Oshiomhole was expected to appear at a campaign rally alongside Pastor Osagie Ize-Iyamu,  the APC governorship candidate in the September 19, 2020 election in the state, when a  trailer driving in the same direction veered off its course, hit the back up Toyota Hilux vehicle carrying seven policemen, forcing it off the road into the bush and rammed into the Sports Utility vehicle carrying Comrade Oshiomhole, causing substantial damage.

“We are sad to report that two police personnel in the Toyota Hilux truck lost their lives while two others are in critical condition receiving treatment at a hospital in the state. Comrade Adams  Oshiomhole and other persons in the convoy , apart from those indicated above, did not sustain any injuries.”

The team said there was more to the accident.

“Without prejudice to police investigations, eyewitnesses accounts suggest, and we believe rightly too, that this was an assassination attempt targeting Comrade Adams Oshiomhole. It is painful that innocent policemen performing their legal duties lost their lives in this very unfortunate incident,” the statement added.

In another statement by the Chairman of the APC Media Campaign Council, John Mayaki, the campaign said it was suspending the scheduled event to honour the dead.