The Oba of Benin, Oba Ewuare II held a peace meeting today, 2nd September, 2020 between the gubernatorial candidate of the Peoples Democratic Party, Godwin Obaseki and the gubernatorial candidate of the All Progressives Congress, Pastor Ize Iyamu. Other political stakeholders in the state were also in attendance, including the former National Chairman of the All Progressives Congress (APC), Adams Oshiomhole.

The Oba of Benin warned the political candidates and stakeholders of engaging in violence before, during or after the elections. Expressing his worry over the recent violent attacks between the All Progressives Congress and Peoples Democratic Party in the state, the Oba urged the politicians to conduct themselves in a peaceful manner. 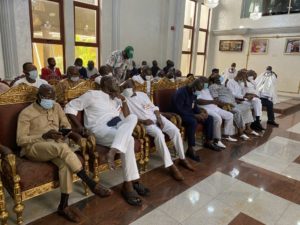 “This is the worst scenario of all the politics that we have seen in Edo. Edo politics have been in the news for quite sometime now for all the wrong reasons. I have had sleepless nights over this. My mind is burning up over this violence and shooting all over the state. Let the shooting stop and let there be peace and quiet in the state.

“This singular act changed the prediction of international community that Nigeria will break up as a result of that election. We are begging you politicians, particularly the two political gladiators. You must all do your bit to calm down the tension in the state.” 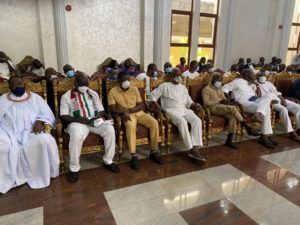 The Oba also said that he would continue to remain non-partisan as regards the forthcoming Edo Gubernatorial elections. He also warned that if any chief of the land makes a statement in favour of a political candidate, such chief does not speak for the traditional institution, he only speaks for himself.