Actress and comedian Niecy Nash shared some happy news on Monday, announcing she is now married to singer Jessica Betts.

The Mrs. America and Claws star, 50, whose legal name is Carol Denise posted a photo with her bride to Instagram and Twitter with a caption sharing her new married named, “Mrs. Carol Denise Betts” and the hashtag #LoveWins.”

In the photo, the happy couple, both dressed in white, joyously hold hands at an outdoor wedding ceremony. Nash wore a white lace gown, while Betts dressed in a cream suit with no jacket. 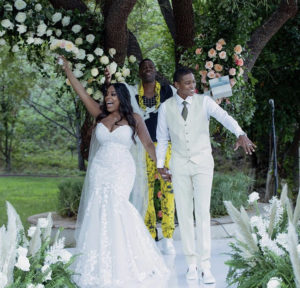 “I got a whole Wife,” Betts wrote in her own caption.

The couple had kept their relationship under wraps, and the revelation of the ceremony also served as a coming out for Nash, who had not publicly been in a relationship with a woman before.

“#PlotTwist,” she wrote in another Instagram post with a photo of herself and Betts, along with a rainbow emoji.

Nash’s divorce from husband Jayson Tucker was finalized in March.