Ifedayo Abegunde, the former Secretary to the Ondo State Government has joined Governor Rotimi Akeredolu’s camp for the purpose of the 2020 Gubernatorial elections. 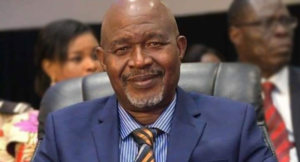 However, after Olusegun Abraham stepped down as one of the Gubernatorial candidates and the subsequent victory of Rotimi Akeredolu, the former SSG has reportedly met with the Governor of Ondo State at the Government House, Akure in order to discuss Akeredolu’s re-election bid.