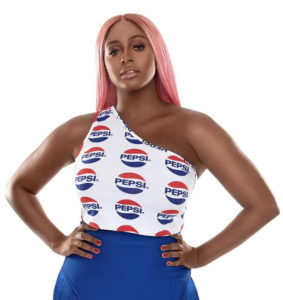 Popular Nigerian DJ, Florence Ifeoluwa Otedola popularly known as DJ Cuppy has reacted to a call for her to be dumped as Pepsi ambassador.

This came from a Twitter user who said that she should be replaced with DJ Switch, another ace female disc jockey.

This was after DJ Switch put up a splendid performance at the ongoing BBNaija reality TV show over the weekend which was hailed by many on social media.

DJ Cuppy who is the brand ambassador for Pepsi posted a photo of herself wearing a dress from them and the man while reacting to it asked Pepsi to replace her.

DJ Cuppy in replying the man said there’s no way Pepsi is going to replace her because they love her so much and she also love them.

But when he wants them to add another female which is DJ Switch why not, she can come on board for them to promote the brand but replacing her is impossible. 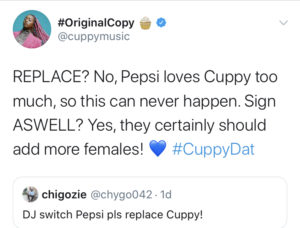