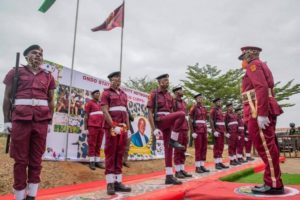 Speaking on a live television programme in Akure, Ondo State, Governor Rotimi Akeredolu said, “We have deployed our Amotekun into the rural areas. That is where kidnapping is taking place. We recruited hunters who know the forest. We will not collapse Amotekun to Community policing. Amotekun will stand on its own. It will operate under its own law. It is not going to be collapsed. There is no intimidation. We will not collapse it. There is no need to pretend. We will make the, to understand. We are not forcing the IG to understand. We have our laws. If anybody feels otherwise, he should go to court. Amotekun has come to stay.”

Governor Seyi Makinde also said, “At Okeho the other day, armed robbers went and rob a bank but thankfully the community rose to the occasion and they assisted to apprehend those people and they combed the forest and that is why I will continue to say and I am saying it for the whole world to hear that Amotekun is here to stay with us and it will not be under the control of the Federal establishment. It will be under our control.

“Security of our people is extremely important and nothing can take place as far as we are concern in an atmosphere of insecurity and Oyo state is a very large area.”

Mompha Drops Suit Against EFCC After He ...